Keepin’ it simple. I boiled some potatoes and peas, then microwaved two “cod in lemon butter sauce” pouches for 11 minutes. Ding! Dinner’s done. Not bad. Not really good either. Although, I must comment on the potatoes. French potatoes are better. Smooth, creamy, sweet, with thin, tasty skins… if only our potatoes were this good.

On our way to Annecy, we noticed this cute restaurant that was totally full – always a good sign. We both had the menu of the day. We started with the charcuterie plate- delish! Adam had the beef dish, not sure what cut it was, with a delicious country wine gravy and potatoes. I had some kind of white fish with an herb cream sauce and peas with onions and bacon. All was very simple and good. We then had dessert. Adam had the fromage blanc and I had a chocolate brownie-type cake – both nothing special. Of course we completed the meal with espresso 🙂

Apparently we hit the end of the lunch rush, because the place cleared out very quickly after we arrived (maybe we smell bad?). French restaurants are very strange. They are open from 12 until 2:30 then 7 until 10:30. Don’t you dare try to eat at 3pm or 6pm! 😉 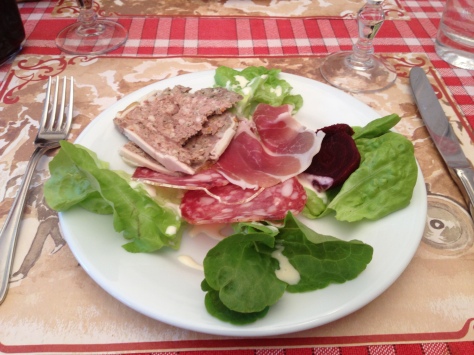 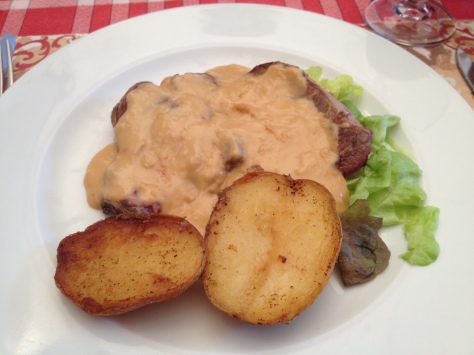 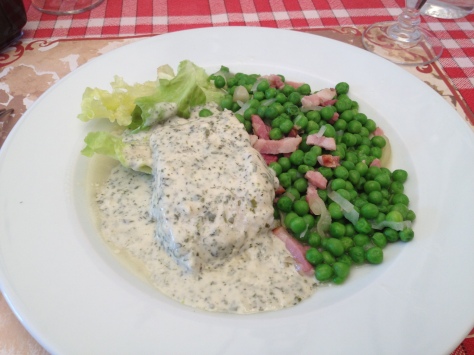 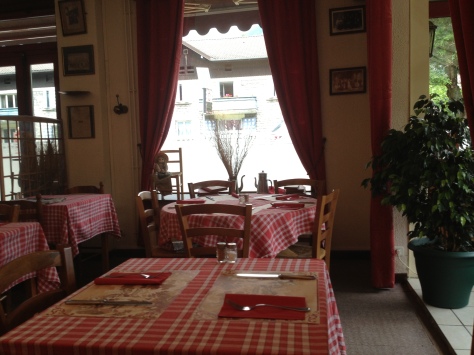 This was the first meal Charity prepared since leaving DeKalb.  Cyrille suggested we make it because it’s easy and delicious.  He was mostly right.  While this dish was nothing spectacular, it was very easy to make and very tasty.  The pastry dough and filling come seperately.  The dough was refridgerated and ready to bake with pre-cut holes.  The filling was from a jar, (not the same as jarred/canned foods in America, much better).  Charity doctored it up a little, with a little of this, a little of that, whatever spices and herbs Jessie had in the apartment.  We had steamed peas on the side, which I chose to spoon into my little potpies as I ate.  Tasty tasty tasty.  Much to Cyrille’s surprise, I managed to eat five of these, he had only one.

I’m always glad to turn up for dinner at the college and see traditional English dishes; it gives me hope that the food will actually be tasty.  Although this steak pie was not quite as good as the pork pie, it was still really tasty.  The chunks of steak were tender, the mushrooms were small and nice, and the gravy was thick and savory.  The crust on the top seemed like it was just too thick, and not flaky enough for my liking.  The potatoes were so-so, as always, and the veg was not too good.  The dessert was whipped cream with a very small amount of lemon custard mixed in randomly.  The salad was bad, and made worse by my mistake of trying the salad cream, yuck.  But the steak and mushroom pie was pretty tasty, so it wasn’t a total loss.

After going to Stonehenge, we drove into Salisbury to get dinner.  Dr. Holbrook, my biology professor, suggested that we try The King’s Head.  It was a giant bar and restaurant.  Easily the biggest restaurant I’ve been to since arriving in England.  I ordered the steak and kidney pudding, with chips and peas.  The pudding was really nice.  It had a great gravy, and big chunks of steak inside.  I could have used more kidneys in there, as I only noticed one bite of kidney.  The crust was crispy and flaky, buttery and soft on the inside.  The chips and peas were run-of-the-mill but still tasty after a drizzle of gravy.  I really like English food when its actual English dishes.  All the pies, puddings, and pasties I’ve had have been wonderful, I don’t know why anyone would say that English food is bad!  It’s when they try to make something unusual or foreign that they get into trouble, so it seems to me.

This was my first trip to the famous Turf Tavern!  The very place that Bill Clinton did not inhale in while in college.  The Turf Tavern is a great little place, extremely hard to find, but really cool indeed.  I learned from Robbie and Cara that “Yorkshire pudding” isn’t a pudding at all, it’s the savory pancake-like dough.  The “pudding” was really soft and slightly chewy, amazing.  I covered it in delicious gravy and dipped every bite in perfectly spicy horseradish sauce.  To drink, I had an Old Rosey cider, something like 8% but still really tasty, unlike the “K” cider I bought the other day that was 8.6% and I was told it’s what tramps drink.  It was a truly great meal, shared with great friends.

I actually ordered a steak and ale pie, which looked amazing in the pictures, but they were out of them.  So I settled for this “hotpot” instead.  It was pretty good in the end.  It was made up of tender lamb and potatoes with onions and mushrooms, all baked in a little ramekin.  I actually ordered mushy peas, but they gave me whole, so I mushed them myself and put them in my hotpot.  I’m finding out very quickly that which I always suspected: English food is good if you know what to order —they are expert “pie” makers here.