Wow. France is not going well. We got up bright and early after a long, hungry and thirsty day of travel the day before and headed to Lyon to return our rental car. Everything was going fine, until traffic came to a complete stop on the A 43. At first we thought, “no big deal. It won’t take them that long to clean up the accident”. Then after two hours stuck in one spot on a hot, French motorway with no water, we thought, “Oh my god! We’re gonna die out here”. Finally after 2 1/2 hours, police came through and directed everyone to slowly exit the motorway via a narrow, gravel shoulder. We were so relieved, but concerned we would have to pay the €150 late return fee on the rental.

We rushed to Lyon and arrived two hours late. Thankfully, the clerk was very kind and didn’t charge us the fee. She had heard about the accident. We still don’t know what happened, but it must have been really bad:/ By the time everything was settled we were exhausted. We stopped by a small convenience store-like grocery and picked up a couple things for a simple dinner. Why is it so difficult to get three squares around here?!? We had arugula salads with apple and shallot balsamic vinaigrette. Fried eggs and crusty French bread with country pâté. Not bad. 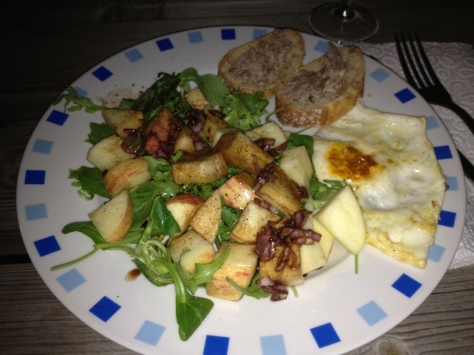